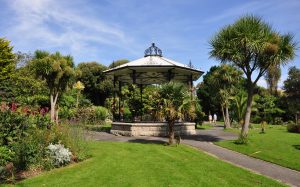 Morrab Gardens’ extensive collection of sub-tropical plants have been accumulated over many years. In the 1880s, unlike today there were no nurseries selling exotic plants, the original planting was the result of gifts from local estates. Contributors to the gardens included the Bolitho family of Trengwainton, the Williams’ at Trewidden, the Dorrien-Smiths at Tresco and Canon Boscawen, rector of Ludgvan.
Morrab House with its walled garden was built in 1841 by wealthy brewer, Samuel Pidwell. Later in the century, Charles Campbell Ross, MP for St Ives and four times mayor of Penzance, purchased the villa where he lived until the 1880s. By the late nineteenth century, Penzance had become a popular seaside resort and required a park for visitors’ recreation. To this end, Penzance Corporation acquired the property at auction in 1888 for £3,120.

The villa was leased by Penzance Private Library and the Borough held a competition to design a public park. London designer, Reginald Upcher won the prize of 20 guineas with his plan for the three acre site. The original design which included a bandstand and sub-tropical garden divided by a series of curvilinear walks is still much in evidence today. A copy of the plans can be viewed in Morrab Library.The cast iron fountain is an elaborate design consisting of a pedestal with dolphins and cherubs riding tortoises. Water was originally sourced from a natural spring above Causewayhead.
The cast iron bandstand was built in 1905 with money donated by local coal merchant JH Bennett.It was extensively renovated in 2004. The Boer War Memorial statue was erected in 1904 to commemorate those who gave their lives in the South African campaign and was fully restored in 2002.When the park opened in 1889, the Gardeners’ Chronicle wrote: “One of its features is a Palm-grove, where tourists may fancy themselves in the tropics or on Mediterranean shores.” A significant role for the gardens was the study of acclimatisation of rare sub- tropical plants, a tradition which continues to this day.